The Challenge of Targeting Late Adopters

We’ve met with several startups recently that are targeting market segments in which there is a lot of room for growth. Some of these are representative of segments that are showing rapid adoption of more advanced technologies like smartphones and tablets.

But some are targeting traditionally late adopters of technology such as older adults. It might appear that technology is currently under serving these users and, therefore, that these markets are ripe for new technology products that would enhance their lives. However, getting the attention of late adopters can present an enormous challenge. This month, we’ll describe this challenge, then explore some strategies that can help you reach this audience.

The Path of Innovation

Everett Rogers introduced his theory of the diffusion of innovations in 1962. 1 Since that time, his theory has provided guidance to businesses and individual innovators when bringing new technologies to market. The normal path to mainstream success begins with innovators and early adopters, as Figure 1 shows. Innovators are typically people who actually develop new technologies. They plug into the newest technologies as a way of feeding their need to innovate. Early adopters are the first consumers in the market and the test bed for other users. Early adopters are typically itching to try new technology, regardless of the quality of its execution. So they usually acquire new products immediately, just to try them out and determine whether something will be a revolutionary success or an innovative misfire. In this respect, they provide a valuable service. 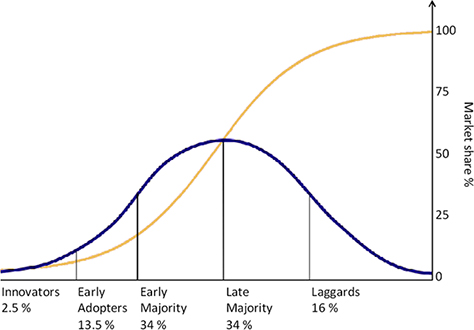 Right behind the early adopters is a group of users called early mainstream. These users typically pay attention to new technologies, but wait for the market to test them. Following early mainstream users are _late mainstream users—_that is, people who don’t usually pay a great deal of attention to technology innovations, but eventually adopt new technologies and products once they have become firmly established or even have an overwhelming presence in the marketplace. These users usually come to new products passively.

Finally, there are late adopters, who are people who tend to be suspicious of new technology, don’t see the value of its new capabilities, or don’t feel capable of engaging with new products because of their lack of experience with technology. Older users are a classic example of late adopters, but this group also tends to include people who live in rural or isolated areas and adult users who earn less than $55K annually.

Trust and direct social influence are powerful forces that can be quite difficult to replicate. In directly targeting late adopters with new products, companies would be skipping ahead in the adoption process, which presents a series of difficult challenges.

One of these challenges is reaching these users in the first place. Many late adopters do not regularly use computers to access the Internet, so common startup marketing strategies such as social media and online advertising do little to build awareness in the target audience. Late adopters typically still have stronger ties to traditional media such as television and print, with their much higher advertising costs, reduced exposure, and fewer measures of advertising effectiveness. Large corporations can tackle this challenge, because they have greater resources at their command, but startups often have difficulty generating awareness of products that target late adopters.

Substantial experience with technology that has enriched their lives motivates early adopters to try new technology products. However, late adopters tend to lack the behavioral precedent of successfully adopting innovations, so the idea can be somewhat alien and uncomfortable to them. Establishing demand for a new technology among late adopters requires their embracing new behavior, so involves much more than just introducing the technology to the market, making its adoption much more difficult.

The process of designing products for late adopters also presents challenges, because of the perspective gap that exists between the innovators who create such products and late adopters. It can be very difficult for product designers and developers to relate to users who are on the opposite end of the adoption curve. As a result, they could develop something they think is relatively simple, but is still too complex for inexperienced users. They might also employ user-interface design conventions they think are fairly standard, but might be completely alien to a late adopter who lacks similar experience interacting with the Web or consumer electronics. Many of the interaction design standards that we use today are not necessarily truly intuitive; they have just been around for so long that most people accept them. Interaction design concepts as fundamental as the desktop and windows are metaphors for physical items that may not be immediately clear to inexperienced users.

By understanding the challenges of targeting those users who are late adopters, we can start exploring strategies that can help us to be successful with this demographic. Once we understand the difficulty that late adopters encounter when using complicated technologies and software user interfaces, it becomes fairly obvious that any products targeting this market segment must be very simple to learn and easy to use. However, the challenge is determining whether a product actually is sufficiently simple to use. To ascertain this, you’ll need to conduct usability studies, recruiting participants from this market segment.

Begin with early concept testing of mockups. Don’t rely on demographics when recruiting, or you may accidentally recruit participants who are not truly late adopters. For example, if you merely recruit people who are over the age of 55, you could end up with a 65-year-old retired software engineer who plays World of Warcraft constantly and practically lives on Facebook. Instead, your recruiting criteria should assess behaviors that are consistent with a late adopter such as the following:

Do not rely on friends and family for concept testing, because late adopters can be particularly susceptible to telling you what they think you want to hear rather than the brutal truth.

During testing, show the mockups to participants and ask them to describe what they think they depict and the value such a product could provide to them. Make sure not to provide participants with any additional explanation of a product until they’ve first given you their description, or you will corrupt their answers. Although their answers are very likely to be incorrect, if they are reasonably close, you are probably on the right track. In this case, you might get away with just making a few tweaks or adding some minimal explanatory text to the product before its introduction. However, if they are way off in their descriptions of your product or cannot see its value, you might need to completely rework your product description, value proposition, or even the entire product. It’s not entirely unlikely that you may find the product is just a bad idea, which is unfortunate, but can save you a great deal of money and effort in the long run.

As you develop your product further, you’ll need to evaluate the actual user interface through usability testing. Again, it is essential to recruit the right participants and ask them to complete tasks without any assistance. Keep a close eye on where participants encounter difficulty and document their actual success rates. Late adopters tend to be very forgiving when using a user interface, and they often blame their own inadequacies in using technology rather than providing deserved criticism. Keep this in mind, and don’t rely too heavily on self-reported data. Instead, focus on objective behavioral data.

For innovative new products, it can be helpful to find a way to piggyback on the normal technology adoption process rather than trying to circumvent it. One way of doing this is to keep early adopters in mind during development. This could mean including some advanced features or creating a separate version of a product that provides value specifically to these users.

Ultimately, your goal is to create enough of a following to create a social influence on late adopters. If you intend to employ this approach, include a couple of early adopters in your usability testing and ask them who they think would get the most out of using your product. If they respond by saying something like This would be great for someone like my grandfather, you’ll know that you are on the right track. Apple’s iPad, with its simple interaction model and variety of features, is a great of example of an innovative product that successfully appeals to both early and late adopters. In such a case, trusted brand perception is a major advantage.

However, it’s important to keep in mind that late adopters might interact with these products in a very different way than you would. For example, users who are 55 and older—many of whom would historically be considered late adopters—are currently the fastest growing market for smartphones. [2] But this doesn’t necessarily mean they are using smartphones to play Foursquare and Angry Birds like early adopters would. In our user research, we’ve found that users from this age group tend to use the most basic capabilities like making calls and a few very popular apps such as the eBay app. Keep this in mind if you are developing a mobile application and, when conducting user research, ask about users’ existing behaviors, so you can discover the reasons why late adopters might use some apps, but not others.

Late-adoption populations offer tremendous potential for growth, but they remain untapped for a reason. Breaking new ground with late adopters presents a significant challenge. While, as always, the key to success is understanding your users, this can be especially difficult in this case because of the experience gap between late adopters and the innovators who develop technology products. To bridge this gap, make sure you do adequate user research. Remember, what you think is simple and intuitive might not be for a late adopter. You’ll have to challenge all of your assumptions to create a successful product.

It’s also important to think about how a late adopter might become aware of your product. Common marketing strategies such as social media and online ad campaigns would probably fail to reach this audience. Finally, try to find ways to leverage the adoption curve by creating interest in your product among early adopters and mainstream users. By employing these methods, you are much more likely to produce a product strategy that will find success in the marketplace. We invite our readers to share their thoughts and experiences with developing products for late adopters.